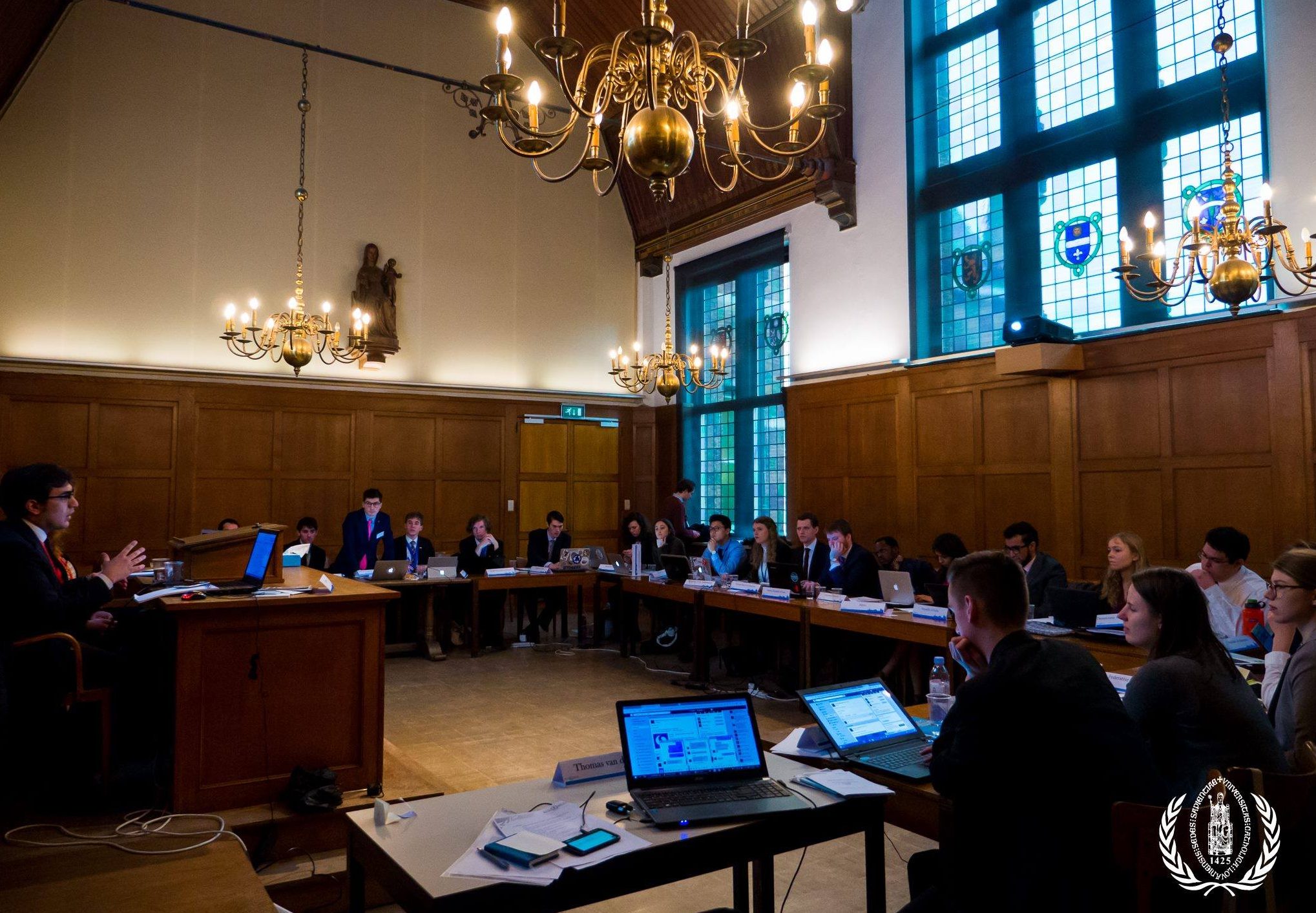 Every year, the KU Leuven Model United Nations Student Association vzw (KULMUN) hosts its own international Model United Nations Conference open to students from all over the world. KULMUN 2017 is a so-called Model United Nations (MUN) Conference, in which academic simulations of various bodies of international organizations take place. During these simulations the participants, called delegates, represent their assigned countries as a diplomat, whose policy and interests they aim to defend during negotiations concerning an international issue, and following committee protocols. The topics debated are usually present-day topics, such as the situation in Crimea or the state of the European economy. To ensure a fluid discussion each debate is moderated by dedicated Chairpersons. At the end of the committee sessions it is expected that the delegates reach a decision, which usually consist of a compromise, to successfully conclude the conference.

Our motivation for organizing the yearly KULMUN conference stems from our enthusiasm and passion for international politics. Students from all over the world share this profound interest and are willing to step out of their comfort zone to engage in a debate with others. It is these people that KULMUN strives to bring together, hoping to further encourage dialogue, debate, and global citizenship.
Partaking in a MUN Conference helps developing various abilities such as researching, public speaking, debating, and writing skills, in addition to critical thinking, teamwork, and leadership abilities. Therefore, one of the main objectives of the KULMUN Conference is educating motivated students who wish to complement their education with practical experience in the operation and decision making of inter- and supranational bodies, international politics and diplomacy. The so-called soft skills we aim to develop can be situated on three different levels.

Firstly, and perhaps most importantly, we aim to support the enthusiasm and interest of our participants on a personal level by giving them the possibility to experience negotiations over international topics on a small scale, and to let them work towards a consensus to an issue relevant to today’s world. We also hope to further their personal development and growth by making themselves responsible for their own learning, in their research and their actions in the committees. Additionally, the international character of KULMUN brings participants into contact with equally engaged students from other countries, promoting tolerance and dialogue through international friendships. It is often at the social events that students learn to see and discuss a problem from a different angle.

Secondly, on a professional level, soft skills developed at conferences, such as communication, planning and problem solving, are invaluable skills for many professional positions. In this case the conference can act as an excellent training ground for the know-how that can significantly help the employability of the partakers.

Lastly, on the public level, in giving participants the opportunity to debate about international issues, we also give our delegates the chance to enter in direct contact with other people. The informal and social settings become excellent places to discuss their opinions and ideas and to explore and perhaps adopt new ones. Add to this the knowledge they receive about the workings of important political institutions and KULMUN offers a place for social integration of internationally minded students. In addition, the great amount of responsibility that we give to the participants may encourage them to take political initiative in the future. Moreover, we want to give our delegates the opportunity to meet with other students from around the world and learn about cultural differences. By participating in a conference, a delegate should strive to understand all countries policies and interest so they can come up with a sophisticated solution to the topic at hand. Furthermore, not only the delegates will learn a lot during our conference but also the organizing team and the secretariat will improve themselves. Also, entirely consisting of students, they are dedicating a substantial amount of extracurricular time and effort to make our conference successful, working closely together trying to achieve a common goal.

This year we organized our seventh edition of the KULMUN conference from the 7th to the 11th of March. For the first time, we chose to organize the conference around a specific topic, namely; “Dignity for all: our global responsibilities for humanity”. This resulted in 6 committees, filled with more than 168 delegates from all over the world. We welcomed over 35 different nationalities to Leuven. We had for example delegations from the United States, the United Kingdom and Germany, but also single delegates from Greece, Kazakhstan, Egypt, China, Belarus, …The 6 committees we simulated were; the Security Council, the Human Rights Council, the North Atlantic Treaty Organization, the International Monetary Fund, the World Health Organization and a Crisis Simulation on the topic of the Kashmir conflict. Within those committees, different topics have been discussed such as; ‘The Kashmir Conflict’, ‘The Security Vacuum in Libya’, and ‘Potential Destabilising Impact of Brexit on the Global Economy and the European Union’.

After months of preparation, it was an amazing feeling to see the University Halls of the KU Leuven filling up with all the participants of the conference. During the Opening Ceremony, we had the opportunity to hear interesting speeches of Steven Vanackere and Joris Couvreur, after which we officially opened the conference. The first day, we slowly started the debates followed by an international party where the participants brought some food or drinks from their country of origin. From the next day onward, the serious work started. We debated every day from 9:00 until 17:30. Luckily at night, we had the chance to relax a little bit with a Jazz Night following the committee dinner, or the Delegates’ Dance, the formal social event on the closing night of the Conference with a reception and classical music.

One of the reasons to organize or participate in an MUN conference, is that it opens your mind. As each committee consists of a consciously varied range of countries and positions (from Saudi Arabia to the USA; From Angola to Ukraine; …) the debates illuminate different angles. In addition, participants are required to engage in opinions and policies that sometimes fundamentally differ from their personal opinion. It is always very interesting to see these different political opinions in one debate next to each other. Following the official MUN-rules results in a very structured and well-organized debate where everyone has the possibility to state their opinion. On top of that participants come from a variety of countries, which means that also on a personal level they unquestionably have diverse political opinions. One of the main goals of our association is stimulating a global debate based on these MUN simulations.

Is Model United Nations the solution to the indifference of the youth concerning the world’s problems? Will every MUN participant become a balanced, open-minded person who will attribute to solutions in the future? The answer is no. However, MUN should be encouraged and cherished as a form of education. The MUN world encourages students to put time and effort into travelling to another country, representing other opinions than their own, learning about topics that are often not mentioned in the media and to broaden their world. It is the balance between getting more insight in the diplomatic world and meeting international people that makes the experience totally worth it!