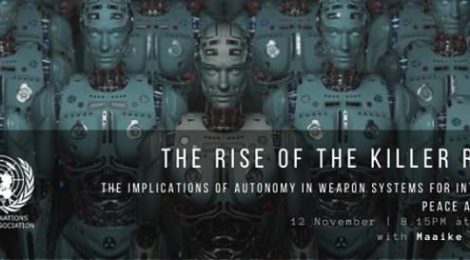 UNYA Leuven invite you on Tuesday 12 November, 20:00 until 21:30, for their lecture on ‘ Rise of the Killer Robots: the implications of autonomy in weapon systems for international peace and security’.

For this lecture they have the pleasure to welcome Maaike Verbruggen to talk about one of the most interesting topics in contemporary international law and politics, namely Autonomous Weapons Systems. Maaike is, as a Doctoral Researcher at the International Security Cluster, specialised in Emerging Military Technologies, Military Innovation and Arms Control.

Summary of the lecture:

It is hard to miss the advances made in Artificial Intelligence and Robotics over the past decades. Militaries around the world have not missed this either, and they are increasingly interested in incorporating autonomy into their weapon systems. While some uses of these technologies are relatively benign, others are much more problematic. Especially concerning are so-called Lethal Autonomous Weapon Systems (LAWS); weapons that can select and/or engage targets without human supervision. These weapons pose serious questions about their status under International Law, the ethics of algorithmic decision-making over life and death, and the implications for strategic stability, conflict escalation, and arms racing. As such, LAWS have been the subject of discussion at the United Nations since 2014. However, these negotiations are not without challenges. This talk will set out the state of autonomy in weapon systems globally, and zoom in LAWS and the various concerns they raise. As technology advances, it is important that the international community carefully decides how the new relationship between humans and machines should look like on the battlefield of tomorrow.